Heather, Tyrone, and John attended their first grassfed beef course in 2011 in Iola, Texas. Tyrone was training to become a Surgeon and Heather was working as a Dentist in Michigan at that time. The family made trips to south Texas every year to hunt whitetails and their family's hunting ranch was also a working cow calf operation. This planted the seed to someday own their own cattle ranch. They began to read and watch videos on cattle ranching concentrating on the low input grassfed/grass finished method of ranching. This led to finding the course in 2011 by Gene Sollock. This was a short one day course on how to raise grassfed/grass finished beef using rotational grazing. Mr. Sollock was running 100 head of cattle on 90 acres rotating through two and a half acre paddocks. His cattle were fat and happy! As Tyrone's training continued they continued to learn about cattle and grass. Eventually Tyrone graduated as a General and Vascular Surgeon and started his practice in Tyler, Texas in July 2013.

The family bought a small eight acre homestead and fenced it for cattle all the while continuing to educate themselves. Then Tyrone met Dr. Joe Prudhomme at East Texas Medical Center. Dr. Prudhomme is the largest Simmental breeder in Texas and owner of 7P Ranch. He become a mentor and friend to Heather and Tyrone. Once the fencing at the house was complete Heather, Tyrone, and John bought five bred Simmental cows and heifers at 7P Ranch's October 2016 sale. Three Miller Ranch was born! Within a year the cattle continued to multiply through calving and new purchases. The herd now needed a real ranch to graze so the family began to look for a sizable piece of property with good grass. They found the perfect 246 acres just outside of Frankston, Texas near Poynor, Texas. The ranch has a creek, ponds, and plenty of good grass and woods. It is a paradise for both cattle and wildlife! Fencing was needed so MTM Land services out of Flint, Texas was hired and a perimeter fence was put in place. The herd was taken from the house to the ranch in late 2018 and the rotational grazing began!

Heather, Tyrone, and John stretched thousands of feet of electric wire and water lines across the ranch until finally they had 33 paddocks to rotate the cows through and a separate area for bulls with their own 6 paddocks. The cattle move to fresh paddocks of green grass daily with fresh clean water! They love to move and are always ready for a new salad bar to eat! Heather, Tyrone, and John continue to work on the ranch daily making improvements here and there! They have even attended a Ranching for Profit school and are implementing the knowledge they have gained from that as well.

We Want to Hear From you

Three Miller Ranch would love to hear your opinions and your advice. If you have tried our beef and enjoyed or didn't we want to know. We want to provide the highest quality beef so tell us if we can improve. Also share any good recipies with all of us! We will keep you up to date on any changes at the ranch so keep us up to date with how we're doing.​
Contact Us
Follow Us on Facebook 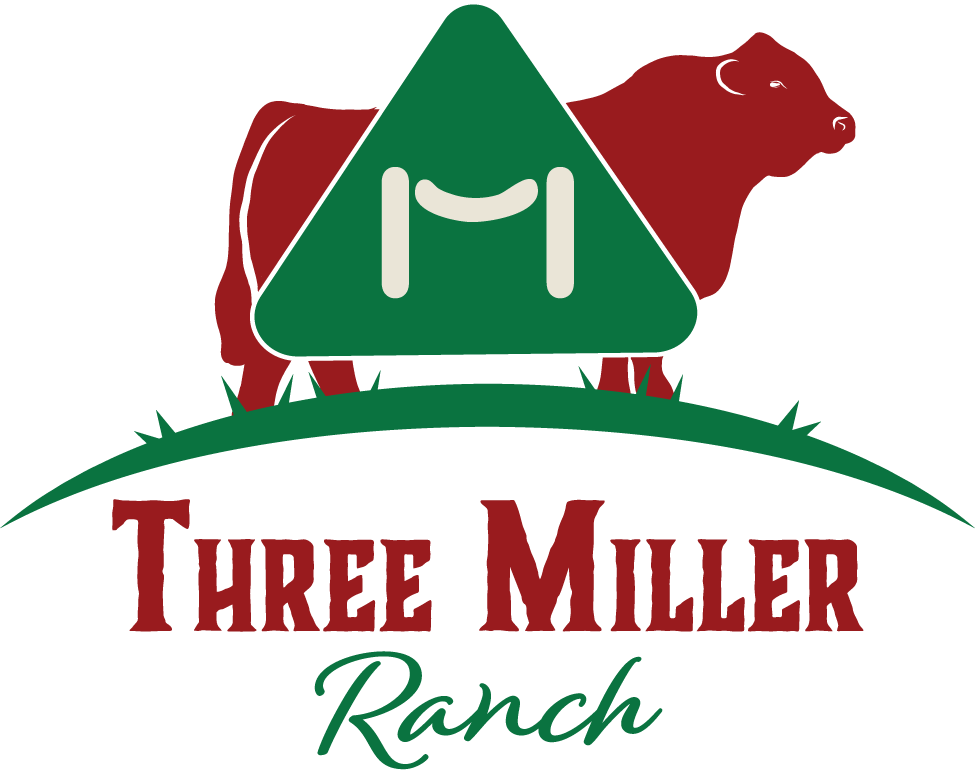 Take A Look Around